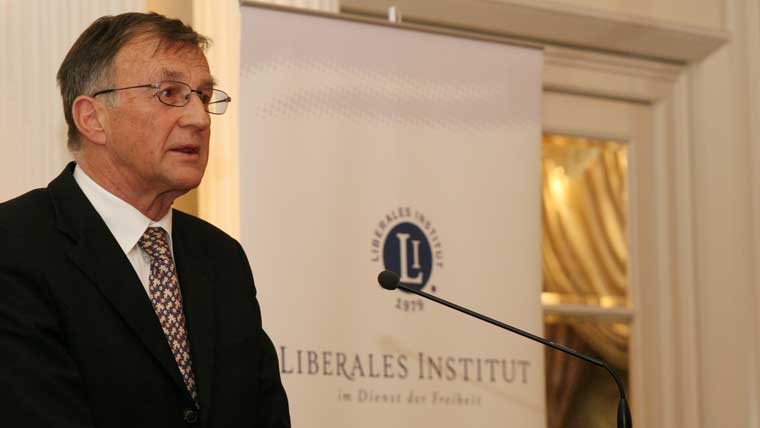 “Doing business is nothing more than continually making choices between different options” wrote economist Wilhelm Röpke in “The Doctrine of Economics” in 1937. This does not apply to the money I have been working with for more than fifty years. There are no choices and no options there. We are at the mercy of the money that our country’s central bank creates.

My generation has learned that today’s government paper currencies cannot fulfill the three basic functions of money, namely the exchange function, the unit of account function and the function as a store of value. We’re lacking a monetary alternative.

When I graduated as a poorly paid financial analyst intern from the then Schweizerische Kreditanstalt SKA in New York in the early 1960s, money was tied to gold, at the fixed price of $35 per ounce. Consequently, the theory of value preservation culminated in the concept of intrinsic value – the financial world of the time still thought in terms of real value.

Thanks to the link to gold, money served as a fixed measure of value, just as the “mètre étalon”, the meter standard in Paris, is a consistent and absolute measure for every carpenter and painter. Gold fulfilled the exchange function – also internationally – via the fixed exchange rate system of Bretton Woods. As a result of the rising overvaluation of the dollar after the Korean War, however, the U.S. began flooding the world with paper dollars as early as the 1960s. This increased uncertainty about the value of all currencies, since the dollar served as their reference currency. The monetary system was built on sand from the very beginning.

In 1971, U.S. President Richard Nixon abolished the gold standard and with it the backing of paper money by any real value. Shortly thereafter, the fixed exchange rate system established at Bretton Woods in 1944 collapsed. In relation to the Swiss franc, for example, the U.S. dollar fell from CHF 4.33 (1971) to CHF 1.47 (1978) within seven years, and the then president of the Swiss National Bank, Fritz Leutwiler, failed to combat the overvaluation of the Swiss franc through negative interest rates. Only when Leutwiler indicated that he too could print franc notes in unlimited quantities did the exchange rate of our currency fall from 1.47 (1978) to 2.92 CHF (March 1985) per dollar, but inflation also rose from 0.2 percent (1978) to 7.8 percent (1981). In other words, in order to compete, the then National Bank President, under pressure from the export industry, decided to debase the currency too. In a globalized system built on quicksand, no country can stand as a beacon of stability – an experience that was repeated in 2010.

During the stagflation after 1974, savings deposits lost purchasing power continuously at a maximum interest rate of 4.5 percent, and had to be taxed on top of that. The interest rate for new mortgages rose to over 8 percent. For many bank customers, this incredible volatility in nominal interest rates was a serious threat. Therefore, starting in 1981, I relied on the indexation of money, i.e., on linking the value of money to real growth,* and granted two privately financed “real interest mortgages” – a first experiment with privatized money.

The experiment succeeded. The two real-interest mortgage borrowers at the time are still happy real-value owners today. At the nominal interest rate, which was inflationary at the time, they would not have been able to afford a home in the long run. At the real interest rate, however, which in Switzerland averages only 1 to 1.5 percent, they could.

In 1990, I encouraged the Luzerner and Berner Kantonalbank to issue the first index bonds in Switzerland. This experiment proved to be beneficial for both lenders and borrowers. The two cantonal banks, which would have had to pay a fixed nominal interest rate of 8 percent for bonds at that time, got away with only 5 percent thanks to indexation of 2.5 percent above the consumer index in the low-inflation years 1994 to 1999. Savers always received 2.25 percent real interest during the entire period. This was an innovation. This is because the broad nominal saver, i.e. the typical middle-class citizen with a standard savings account or bonds, is hardly able to preserve the value of his savings at standard interest rates and after accounting for inflation and taxes.

In 2001, after the Internet bubble burst, the US Federal Reserve began to prop up the financial markets with repeated money supply surges. In the same year, my son Remy Reichmuth and I published a book on the RealUnit, an investment fund based on Switzerland’s economic performance.** It was purely practical experience that led to the concept of the RealUnit. This unit – initially conceived as a fund investment – is based one-third on real values and two-thirds on indexed nominal values. Thus, on the one hand, the RealUnit offers savers a share in economic growth and, on the other hand, protects them against devaluation through inflation – namely inflation of asset and consumer prices. Interest in the proposal was initially low. But the financial crisis raised doubts among laymen and experts alike about the state monopoly on money.

The fact that central banks assumed unsecured debt on an unimagined scale in order to save the financial system fueled unease. At last, the opportunity presented itself to implement the RealUnit Fund as an alternative to pure nominal savings and thus to deliver a proposal for the recovery of the entire monetary system. The interest increased.

Anchoring normal savings in gross national product limits excessive paper money creation in today’s banking system, what is also known as fractional-reserve banking. The link to economic performance has the effect of a full-reserve banking system – as already propagated by Friedrich A. von Hayek in his book “De-nationalization of Money” in 1977.

In this way, the savers and investors of the middle class – the bearers of democracy – are given an instrument that frees them from the state’s monopoly on money and thus makes them independent. This fulfills Röpke’s concern that everyone should be able to do business, that is, to choose between two options.

Incidentally, the function of preserving value already depends less on the state than is generally known. The wealthy, who have a portfolio individually designed to suit their needs, have always created their own store-of-value currencies. Thus, the concrete world of finance is in fact already adhering to Hayek’s recommendation that only a competitive monetary order could save the capitalist system.

Central banks, despite their monetary monopoly, can hardly compete against this trend in the financial world. Neither the public nor the monetary theorists have yet realized this power shift in the monetary system. This is good news: it is increasingly the investors who control the money, and the state is losing its grip on it.

Karl Reichmuth, born in 1939, worked as a banker at Schweizerische Kreditanstalt and Luzerner Kantonalbank. In 1995 he founded Reichmuth & Co. Privatbankiers in Lucerne as a partner with unlimited liability. The text is based on the acceptance speech given by Karl Reichmuth for the Wilhelm Röpke Prize of the Liberales Institut.