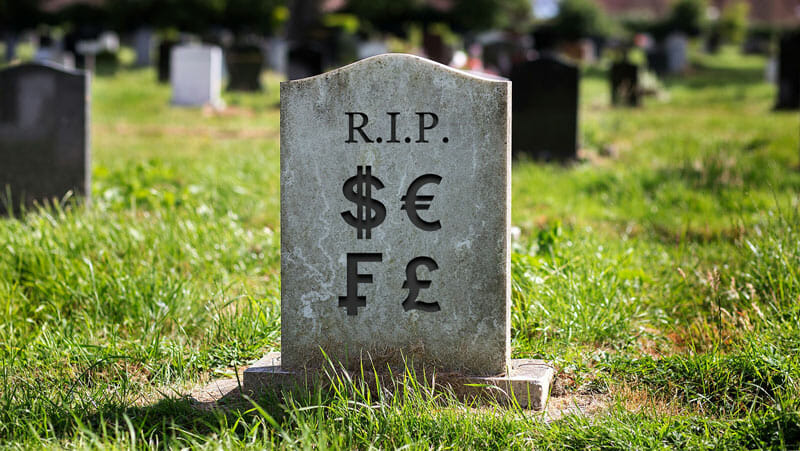 by Demelza Hays, Advisor to RealUnit

Unlike fine wines, fiat currencies do not get better with time. In fact, the average lifespan of a fiat currency is only 27 years.[1] The dollar became a fiat currency on August 15, 1971. This makes the dollar almost 50 years old, an old man by fiat standards. CHF and euro are younger chaps, that’s one reason why people still believe in them. The Swiss franc’s final tie to gold was severed in the 2000s making it almost 20 years old, and the euro, which never had a tie in the first place, just had its 20th birthday on January 1.

The age of a fiat currency does matter, because you do not want to be holding one when it breathes its last breath. Luckily, the life cycle of a fiat currency follows a predictable pattern. First, politicians get elected on feel-good slogans that promise heaven on earth. In order to pay for their votes, cash-strapped governments issue new debt and then buy their own debt by creating money out of thin air. Politicians use this method instead of raising taxes, because this will not be opposed by two parts of the democracy: the lower income and uneducated part of the democracy that does not understand economics and the ultra-rich and well-educated top one percent that benefit from the government-induced nominal price inflation of their personal assets. Sandwiched in between is the shrinking middle class that must work harder each year to cope with rising housing and energy costs and stagnating wages.

After the initial celebration and political hubris around the birth of a fiat currency, fiat currencies quickly give into peer pressure. Even though we read about the perils of inflation in the chapter about the Weimar Republic, the other fiat currencies on the block are all doing inflation. The politicians tell us it’s the cool thing to do, and if we don’t do it, there will be grave consequences like our big faceless corporations won’t be able to export their crummy products at cheap exchange rates to foreigners or prices will decrease and the economy will go into a deflationary death spiral.

During the teenage years, the reserve assets held by the central bank are reduced in quantity and quality. The fiat currency gets into drugs like quantitative easing, repos, and coupon passes. Unemployment begins to rise, as prices in the economy are no longer representative of what consumers really want. There is a systematic misallocation of capital that destroys hard-earned savings that took centuries to accumulate.

By this point, the original politicians that gave birth to the fiat currency are by now, out of office, sitting on a yacht, enjoying a glass of champagne, and being awarded a Nobel Peace Prize or something in economics. The new stewards of the currency suffer from the Prisoner’s Dilemma. If politicians live within their means, they will be chastised as too austere. If they tried to curb inflationism and stick to long run gains, they won’t be there to receive credit for a healthy economy. Instead, they will be demonized for foregoing the immediate short-term gains of credit expansion bringing about the inevitable bust. To stay in office and make their party happy, they must support the continued abuse of the fiat currency. This is probably why there have been more than 80 different fiat currency crises in various countries during the past forty years.[2]

Privately Issued Cryptocurrencies are the Future of Money

In the final stages of a fiat currency’s death, there are enormous trade deficits, public debts, privately held consumer debts, inverted yield curves, defaults on loans, and hyperinflation. In response to rising unrest from the plethora of dying fiat currencies, nine countries, including France, China, and Singapore, have already launched or will launch central bank digital currencies. However, central bank digital currencies are just the emperor’s new clothes. If government-issued money was high quality and desired by market participants, the government would not need to punish other forms of money like gold and cryptocurrencies with capital gains taxes, controls, and legal tender laws.

The monopoly on money is a very powerful tool at the state’s disposal, and it’s a monopoly that has been abused for about as long as it has existed.[3] Even in countries that are touted as safe havens like Switzerland, the temptation to pay for political promises with printing cannot be avoided. Since August 2008, the base money supply in Switzerland has grown from approximately 45,000,000,000 CHF to 583,000,000,000 CHF.[4] This is more than a 10-times increase in the money supply created out of thin air. The abuse can also be witnessed by the prevalence of negative interest rates on government treasury bonds in the European Union, Japan, Switzerland, and up until recently Sweden. Sweden increased their interest rates in December of 2019 to zero percent, putting them in a better position to lower interest rates and stimulate the economy in the coming recession. However, Sweden is not a saint. Keeping interest rates at zero is still ludicrously low, distorting the loanable funds market, capital structure, and eroding savings.

Government-issued monies systematically succumb to an inherent conflict of interest between expedient political conveniences and the interests of the holders of each country’s currency. In 1975, Hayek gave a lecture entitled “Choice of Currency,” in which he articulated for the first time the provocative demand that the state monopoly on money should be repealed.[5] The publication of the monographs Free Choice in Currency and The Denationalization of Money followed a year later, in which he expanded in greater detail on his ideas on competition between private money issuers.

Saifedean Ammous writes in the Bitcoin Standard that a currency with no supply inflation is the ultimate form of money.[6] What actually matters is not that the currency has no inflation. Gold has a steady inflation rate. According to the Monetarists’ rule of constant money supply growth,  what matters and is an absolute requisite for economic growth is non-politically dependent inflation. If there is inflation, it must be low, predictable, and fair, meaning that it must not benefit one group in society at the expense of another. The nature of Cantillon effects and the non-neutrality of money necessarily entail the first receivers of new money benefit more than the last receivers as they’re able to spend their newly acquired funds before prices have adjusted to the new supply of money. This is where algorithmic cryptocurrencies come in. They enable voluntary, artificial, and arbitrary limits on the total supply of units in circulation and the periodic inflation rate of those units. Once the currency is fully mined and the total units available is capped, the currency will become inherently deflationary as the supply of goods and services increases while the supply of money stays the same or declines as coins are lost. This is a good thing, from the standpoint of maintaining the value of the coin and the savings individuals put into it. Konrad Graf’s latest paper discusses how making boundaries on the total supply and emission rate are artificial but nevertheless beneficial for establishing a sound global money for the digital economy in the 21st century.[7]

Although fiat currencies are breathing their last breath, cryptocurrencies are just being born. In order to create full freedom of choice for money producers and users, the money monopoly of the state has to be repealed and replaced by an environment in which private currencies can be developed and can compete in a decentralized discovery procedure. As money users would punish producers of unsound (i. e. inflationary) money by abandoning it, both government and private currency suppliers would be motivated to keep their seigniorage income low and to issue sound money. Currency competition between public fiat currencies, private decentralized currencies, and private centralized currencies will restore individual freedom to choose which currency to store their wealth in, and this will force governments to improve the quality of money they offer or go out of business.[8]

Demelza Hays is a Blockchain Advisor at RealUnit Schweiz AG. In line with monetary economics, RealUnit Schweiz AG is working on a second-generation cryptocurrency that improves upon Bitcoin by reducing unnecessary electricity use and increasing purchasing power stability. More information regarding this release is available here.

[5] See “Choice of Currency: A Way to Stop Inflation,” Friedrich A. von Hayek, The Institute of Economic Affairs, 1976. 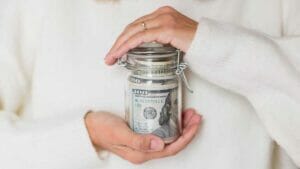 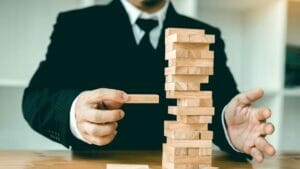 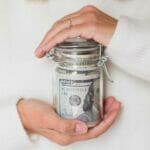 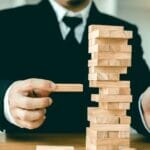